Dan Barton isn’t your typical first time franchisee. Right out of the gate, he purchased two Dickey’s locations; one in Park City, UT and another in a location to be determined.

Dan and his wife Stephanie, who reside in Farmington, UT, opened their first Dickey’s Barbecue Pit location in August 2015 after finding Dickey’s on the Franchise Solutions’ portal last January.

Dan is an investment banker by trade and a real estate investor who owns and rents out five condos around the University of Utah. Stephanie formerly worked in the freight industry but out of the two of them, is the one who has a passion for food. 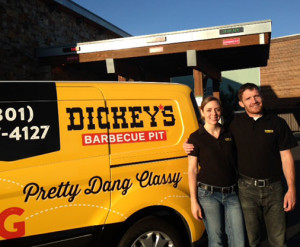 “I chose Dickey’s Barbecue Pit because it’s one of the top growing franchises in the country and a brand people know and love,” said Dan. The fast-casual concept has expanded to more than 530 locations in 43 states. Dickey’s Barbecue was recognized for the third year by Nation’s Restaurant News as a “Top 10 Growth Chain” and by Technomic as the “Fastest-growing restaurant chain in the country.”

Originally the couple wanted to open their Dickey’s in Salt Lake, UT near campus but changed course when negotiations with a landlord were stalled. They decided on Park City due to the lack of BBQ competition and the amount of tourists who visit that area. “We’re hoping to capitalize on a unique market, where you’ve got three million people coming to visit annually,” said Dan.

“Dan and Stephanie have opened our 10th Utah location,” said Roland Dickey, Jr., CEO of Dickey’s Barbecue Restaurants, Inc. “We are thrilled to further expand our footprint across Utah and look forward to becoming a part of this great community.”

To celebrate the launch, the couple celebrated in true Dickey’s fashion with a three-day grand opening party complete with radio broadcast, giveaways and discounted food.

If you’d like to learn more about the Dickey’s Barbecue Pit opportunity, tap here.

To see other food and restaurant franchises and how they compare to Dickey’s, tap here.

Franchise Solutions is an online lead generator to hundreds of franchises worldwide. Since 1993, our network of targeted properties has helped franchisors exceed their development goals at attractive cost-per economics. We deliver the most diverse reach in the industry, connecting advertisers with business buyers every day.

Find a franchise that’s right for you on Franchise Solutions.


Categorised in: be your own boss, food and restaurant, franchising, quick casual