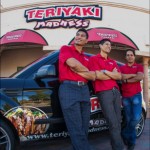 Move over golden arches and make room on the table for chopsticks! When you think fast casual dining hot spots, you may think of pizza, wings and burger joints. A new wave of flavor is about to join the ranks of the dining experience that tempt your taste buds – Teriyaki Madness. Teriyaki Madness offers Americanized Asian inspired dishes that are healthy and tasty.

Teriyaki Madness first opened in 2003 in Las Vegas and two years ago, Rod Arreola, co-founder and CEO, set a goal to have 25 units opened by 2014. He met that goal a year early! Teriyaki Madness’s explosive growth over the last three months is due to 20 agreements awarded to new locations in CA, TX, CO, and NV. In addition to those states, Arreola says they are also targeting AZ and UT for expansion. And his next goal? To have more than 100 stores open within the next five years. Which they are predicting will be surpassed a year early as well.

So what’s all the hub-bub about? Why are potential franchisees attracted to Teriyaki Madness? The bottom line is that Teriyaki Madness has impressive numbers. An average unit has sales of $855K and profits 16-21%. In addition, same store sales are experiencing 23% annual growth. But what also intrigues potential owners is the unique concept of the Asian flavors and healthy options.

“This is really just the beginning,” Arreola said. “After eight years of proving the concept and building the team, it is great to see the excitement from franchise candidates who have experienced the Madness for themselves in Nevada. They see the volume of customers and have been raving fans of the food themselves. That being said, I truly believe this concept really fits anywhere and everywhere.” If you are interested in learning more about how you can be included in the madness of Teriyaki’s expansion, click here.

The benefits for franchisees are appealing:

• Impressive return on investment and profitability

• Operation is simple to understand and execute

• It’s fun! They have a work hard play hard philosophy

Franchise Solutions is excited to see the madness unfurl and wishes continued success to Teriyaki Madness.